The Azores (or 'Açores') is an archipelago of 9 volcanic islands, approximately 800 miles off the coast of Portugal - about a quarter of the way across the Atlantic ocean.  Despite its remote location, there is a distinctly European feel to the islands which leaves you in no doubt that you are officially in Portugal. 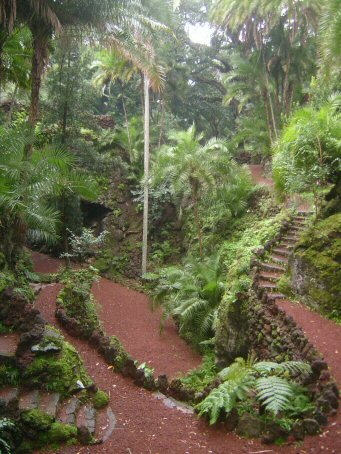 There are numerous botanical gardens

There are small airports on all 9 islands, as well as ferry services - although some of these only run during the summer months.  From tiny Corvo in the northwest to Santa Maria in the southeast, a journey from one end of the Azores to the other would cover more than 400 miles as the crow flies, the actual land-mass covering about 1800 square miles.

It is often said that the Azorean accent is difficult to understand, which it is, but I actually found it slightly easier than Northern Portuguese.  The strange thing about Azorean Portuguese is the very obvious French influence - for example, where the European and Brazilian pronunciation calls for an 'oh' sound, Azoreans opt for a French style 'eau'.  The overall inflection is also very French, making it difficult at times to detect whether an overheard conversation is taking place in Portuguese or French!  Having said that, most of the pronunciation follows European rules, with slushy 's' sounds and clipped word endings.

The largest island of the archipelago is São Miguel (St. Michael), which is becoming an increasingly popular tourist destination.  Ponta Delgada is the capital, and is a good base for exploring the rest of the island.  Although there are several large hotels, the town does not suffer from the same tacky commercialism that blights some of the large Algarvian resorts.  Perhaps this is in part due to the variety of small shops, quaint cobbled streets, busy harbour, several impressive churches, and the imposing 'Castelo São Bras' fort which dates back to the 16th century.

Some of the craters which formed due to the volcanic explosions that gave birth to the Azores, gradually filled with fresh water to become lakes or lagoons.  There is still some volcanic activity to be observed, with bubbling sulpher pools, hot springs, geysers, and hot mud pools in which sealed pots of food can be cooked ('cozido').  The town of Furnas on São Miguel is a good place to see these phenomena.

Three hours (by boat) to the south of São Miguel, is the little island of Santa Maria - with fewer than 6000 inhabitants.  There are small beaches, natural swimming pools, and fishing villages to explore, as well as a museum, various churches (including a chapel attended by Christopher Columbus), and some small fortresses.  Hiking, paragliding, diving, and fishing are popular activities.

This was the third island to be discovered, hence the name - although originally this island was called 'Ilha de Jesus Cristo' (Jesus Christ Island).  Terceira is the 'party island' - the locals celebrate many different festivals with colourful gusto.  Bullfighting is quite popular here - usually involving tormenting the bull but not killing it.  One of the festivals involves guiding a bull through the streets (using a rope) while 'brave' locals tease it with umbrellas and coats. 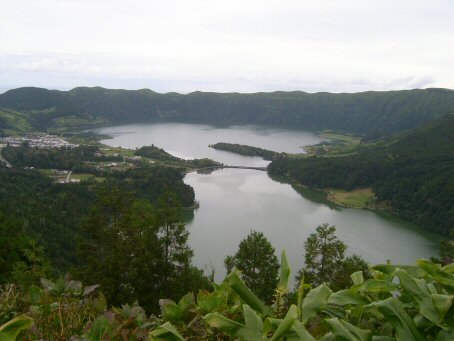 As you would expect, there are lots of churches, chapels, and cathedrals on Terceira - some of them colourfully painted in keeping with the party atmosphere.  There are also palaces and castles housing various prized works of art, as well as beaches, golf courses, and the usual activities such as hiking and fishing.

In the middle of the central group of islands, São Jorge (St. George) is a long thin strip 30 miles long and 4 miles wide.  The other 4 islands in the central group (Terceira, Graciosa, Pico, and Faial) can all be seen from the top of São Jorge's highest mountain: Pico da Esperança, which is a kilometre high.  This volcano is still active - the last eruption took place in 1808.

This island seems to pride itself on culture and tradition - its population generally devout and enthusiastic in observing the summer festivities in honour of the 'holy spirit' (also celebrated on the other islands).  The economic mainstay of São Jorge is its (allegedly world-famous) cheese which is carefully matured with salt at a constant temperature for many months.

Aptly named, Pico ('Peak') is the second largest island in the group, and boasts the highest peak of them all - in fact, the highest in the whole of Portugal at 2351 metres (more than a mile and a half high).  The history and culture of the island is based largely around whaling, but since whaling was banned in 1987, the population of the island has dwindled.  Still, the whale motif is prevalent in many handicrafts as well as at the whale museum in Lajes.

Faial is an important island in many ways.  Data from its meterological centre is a key component in European weather forecasts, due to the influence of Azorean high pressure fronts.  It is also a very popular stop-off point for trans-atlantic sailors, and played a key role in early trans-atlantic flights and telecommunications.  For today's tourist, Faial provides beaches, botanical gardens, churches, museums, and a wide variety of handicrafts. 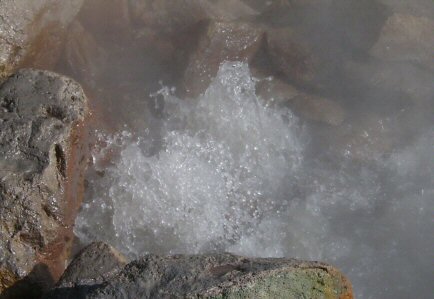 Naturally boiling water heated by one of the volcanoes

The northern-most island of the central group, Graciosa is less mountainous than the other islands, and also enjoys better weather.  Although not a very popular tourist destination, there are some interesting places to visit, including the thermal baths at 'Termas do Carapacho' which are believed to be therapeutic for rheumatism and skin diseases, and the 'Furna do Enxofre' - a lake of warm sulpherous water which lies deep within a volcanic cave.

The name 'Flores' means 'Flowers', which gives you an idea of one of the main attractions of this island - the westernmost part of Europe.  It provides plenty of interesting walks, with numerous waterfalls, lava cliffs, and strange rock formations, but apart from that there is not much for the tourist to do.

Corvo is the smallest island of the Azores - there is only one town with less than 350 inhabitants, and virtually no crime (in fact, there is only one policeman on the island!).  The northwest part of the island is made up of a huge crater called the 'caldeirão' - about 2 miles in circumference.  There is a viewpoint called 'Pão de Açucar' ('Sugar Loaf') - not quite as impressive as the one in Rio de Janeiro, but offering a unique vista nevertheless.

A popular tourist activity from all of the islands is whale and dolphin watching.  Small powerboats take groups of tourists along the coastline where several species of cetaceans can be found.  It is almost guaranteed that dolphins will be seen on these trips - they are very sociable and some species spend the whole year in the vicinity of the islands.  Other species of dolphin, and most species of whales (with the exception of sperm whales) head south for warmer waters during the winter, so April to August is the best time to catch sight of the really big beasties - even the mighty blue whale can sometimes be seen in Azorean waters. 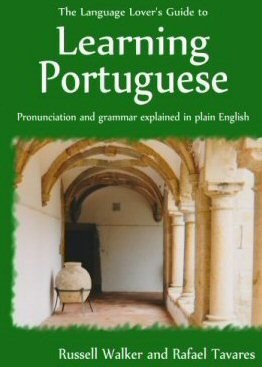